Information on the Year 9 Options process is available to view HERE.

In the event of your child receiving notification of a confirmed Covid-19 positive test result please complete the online form HERE. 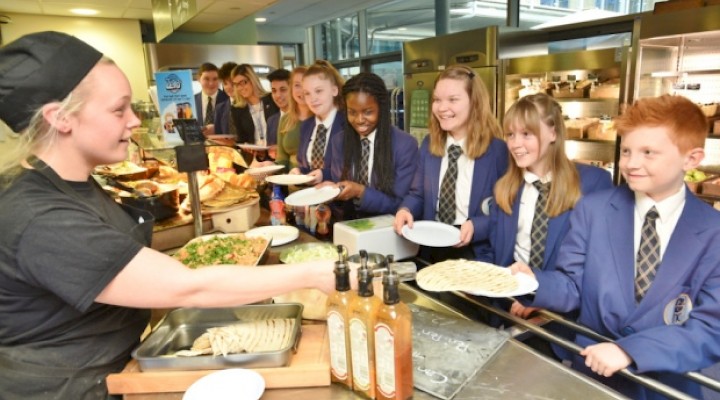 The TV chef captured the public’s imagination 11 years ago with his quest to improve school dinners and make them healthier for children but even he would struggle to match the gourmet lunches which pupils at Hampton College get to enjoy every day with curry and roast dinners replacing cold Panini sandwiches.

It is all a far cry from the food served up 50 years ago when meat, boiled cabbage, potatoes and cake with custard were on the menu.

At least, that was the food served up to pupils at Medway Community College in Kent in 2004 when they tried a week of 1960s’ cooking to get them interested in healthy eating.

Now though, Cucina Restaurants has replaced Hampton College’s traditional canteen with a team of hotel and restaurant chefs who serve up more than 40 different options to hungry pupils and the large portions on offer are going a down a treat.

Sunil Panchal (16) said: “I enjoy the pizzas and the currys. It’s much better than it used to be. I used to have cold Paninis and they were not that great compared to what we have now.”

Brandon Chilvers (12) said: “I normally play football outside so I grab a pizza slice and a drink. But I did try the roast dinner once and it was really nice.

“Before, break-time was alright but I would not have lunch as it was not nice. There was nothing there.”

Oliver Sainsbury (14) feels his school work is improving now that he is enjoying a good meal at lunchtime.

He said: “It’s much better, there’s so much more variety. The prices are about the same but the quality is much better than before.